The last days I have been testing Zone Based Policy Firewall in Cisco IOS. It´s a feature much like CBAC. It´s using the same basics of inspection-configuration. The major difference between CBAC and ZBFW is that while the first is built upon inspection at specific interfaces, the latter defines zones of one or many interfaces and then defines inspection in a single direction from one zone to another.

To make a somewhat realistic scenario I take a router in my home-lab. It´s preconfigured for basic routing without filtering anything. The goal is to make the router stateful with ZBFW. I want to block all traffic thru the router except from outbound telnet. Lets rock. 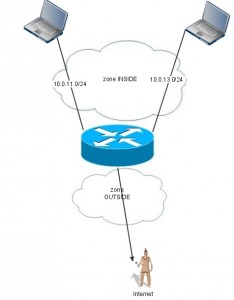 Each interface participating in a Zone Based Firewall-setup needs to be added to a zone. In this basic setup I have 2 zones: INSIDE and OUTSIDE

I have three interfaces in my setup: two internal an one external. The zone-membership is configured on interface-level.

Let´s focus on outbound traffic. We want to allow all telnet-traffic from our INSIDE-zone. This is done with a class-map type inspect. This class-map will later be reused for all other outbound traffic to be inspected, so remember to name it wisely.

4. Decide what do do with it

Next step is configuring the policy-map. Since only one policy-map can be assigned at each function (in this case for traffic from INSIDE to OUTSIDE) it might be reused later. This policy-map will put together all actions we want to take on all traffic in the direction. For now we want to tell our router to inspect all traffic defined by the class-map created in the previous step.

The policy-map is processed in top-down order. At the end of the policy-map there is a class class-default that by default drops “all other” traffic, just the way the implicit deny ip any any does in access-lists.

Now the final step is to apply this configuration. We have zones, let´s create a zone-pair. It is a definition of traffic from one zone to another, in one direction. Traffic in opposit direction (that is in our case: traffic initiated on OUTSIDE going to INSIDE) needs to be taken care of with another setup of class-map, policy-map and zone-pair.

Also, a really good command to remember is the “ip inspect log drop-pkt”. Without it you will not see traffic that gets dropped by the firewall. So remember to add it and maybe remove it as the last step before leaving the building…

Lets verify that I can telnet from INSIDE to OUTSIDE:

What we have accomplished is to make a chain of “maps” that looks like this on a flow chart: 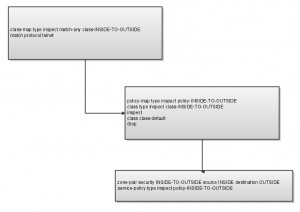 The next task for me is to enable ping from inside hosts to the outside. To make it a bit trickier I decide to make an exception for the internal host 10.13.13.13 who should not be able to ping.

First define what traffic will be allowed. Since we need to specify traffic on a per-host-level we cannot just “match protocol icmp” like we did with telnet, but instead do it with an access-list that is referred to in our previous created class-map (which is type match-any which mean that it can have multiple match-statements and it´s enough to match one of them).

Since the class-map were already in the policy-map with the action “inspect” I dont need to do anything else. We´re all done. Lets verify:

Yes! We can ping an outside host, but not when sourcing from 10.13.13.13. This is verified by the log-output (remember the ip inspect log drop-pkt-command?):

Now the flow of configuration building-blocks looks like this: 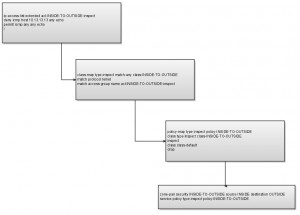 So, why did I specify the telnet-traffic with “match protocol telnet” but the icmp-traffic with an access-list? First of all, the end-result is the same; it will inspect the state of the traffic. Even the pings are inspected and handled in a session-alike fashion.

When doing “match protocol telnet” i rely upon the PAM-table (Port Application Mapping) which by default saids that “telnet” equals tcp/23. If I add a PAM-entry that adds tcp/2323 to the telnet-application, traffic on that port should also have been inspected. But the granularity of just specifying the port or application was not good enough for the ping since we needed to define an exception for a single host.
Of course I could also put the telnet-traffic into the access-list, it would have the exact same end result:

ZBFW is cool if you have to secure a Cisco-router which have many interfaces that can be treated with the same security-policy.