I often get into discussions with customers about the active/active feature of Cisco firewalls (ASA/FWSM). There seems to be a lot of confusions regarding the possible redundancy scenarios.

The short story first: The only scenario when active/active can be done is when you have 2 physical units and at least 2 virtual firewalls (contexts) configured.

But we start from the beginning…

The most common solution for small companies is having one single firewall without any redundancy. There is not much to say about it… 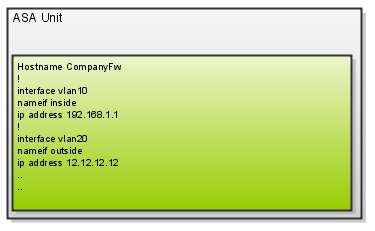 By adding another box you get a active/passive-failover, also known as hot standby. The primary box is doing all the work and the secondary just waits to stand in in case of a failure of the primary. There is no load-sharing.

The usage for this is an organisation that has no need for multiple contexts but wants their firewall to be redundant.

If there is need for multiple context, the firewall can be configured so. Two (or more) different configurations can share the same physical hardware. They can also share interfaces with some exemptions. Each context can have different administrative profiles configured so that a specific person can configure only one context.

Example: Company A and Company B shares a common firewall. Each company has their specific security policies and are each administered separately.

By extending the previos scenario with duplicated hardware one can get a redundant solution. With both contexts active on the left hardware this unit will handle all traffic for both of them. In case of a hardware-failure both contexts will become active on the other unit.

Example: The need for high-available firewall-functionality made the company AB to invest in redundant firewalls. They need to have multiple security policies administered by each companys respective IT-department. It all runs in Unit 1, while Unit 2 is configured as a hot-spare.

If one context is active in one hardware and another context in the other one you will get a load-balanced-ish solution. Normal case is that the left unit handles Department A context and the right unit takes care of all traffic for Department B. In case of a hardware failure on either unit, the context(s) that were active in the failed unit “moves” to the other hardware.

Scenario: To gain performance company AB have distributed the placement of each contexts active unit. The left unit takes care of Department A:s context and the left one handles the context of Department B. Each unit is hot-spare for respective context.

A Cisco ASA-solution without multiple contexts can never be active/active.