↓ Skip to Main Content
Home › Security › Cisco Security › I did not pass the test today.

I did not pass the test today.

I did not pass the test today.

I just left Brussels after my first take on the CCIE Security lab. So, what happened? I Showed up early, 7:40. The test was about to start 8.15 and I waited in the reception with the other candidates untill we were escorted to the lab room. The proctor was We had a lunch break that I can barely remember anything from and all of a sudden it was 5pm and time to leave.

I made a list of tasks and marked each item as it was configured. My sum total was 78p. (100 is max, 80 is passing score). I am not 100% sure that all checked tasks was correct so I expect a somewhat lower score. Score report will probably be available later tonight.

The first hour I did all preparations. Diagram, task list, lab reading and all that. After 1:30 I had the basic l2-l3 setup with ASAs and IPS. I got kinda stuck at the same point as so many times before: understanding the topology, get a feeling about what part of the network should work like what and where the boundaries are. Which addresses should be hidden and which should be universal routable. Doing a few mistakes with that costed me at least an hour to troubleshoot and fix what I killed by mistake.

The self confidence was way low when it was time for lunch. After having something to eat (a hamburger, but I honestly don’t remember what else was on that plate!) I decided to do some cherry-picking. Selecting and gaining the easies points in the work book always do miracles to your mind! I summarized the task list and found that I had cleared about 70p!

The last hour or 2 I just tried my best to get as many of the remaining points as possible.

When I left I had the following list of uncleared tasks:

* 2 individual tasks within the same technology. I definitely know what to study for the next attempt! I tried them both bud left them unfinished after I spent way too much time on them. These could have pushed me over the line!

* one task worth 5 (or so) points. I left it untouched because I realized how much work it would have taken. If I had more Time at the end I’d probably fixed it.

* one 3p task that I immediately saw that I had no idea how to solve. I could have done this as well if I had more time.

Conclusion: I wasn’t prepared enough. I need to speed up my workflow even more and focus on configuring a few specific technologies over and over with different tweaks.

Oh. And the OEQ;s. My worst nightmare came thru: I got 2 hard questions. Now when I think about them I am quite sure that I nailed them. But they are EVIL!

I am SO focused on getting this done. I can hardly get on the plane back to Sweden, I just wanna have one more attempt on it right now!

Out of those other candidates I met today there was none that was confident with their result. At least 3 blew it for sure. One candidate lost ALL configs when doing a reload the last 30 minutes.

While of course feeling a bit sad and worthless today I keep telling myself that there would probably be noone except for me at my company that would pass this test.

I keep repeating Markos words: there are no failures when it comes to the CCIE lab exam. There are only “pass” and “no pass”.

Wait and see, I’ll be back! 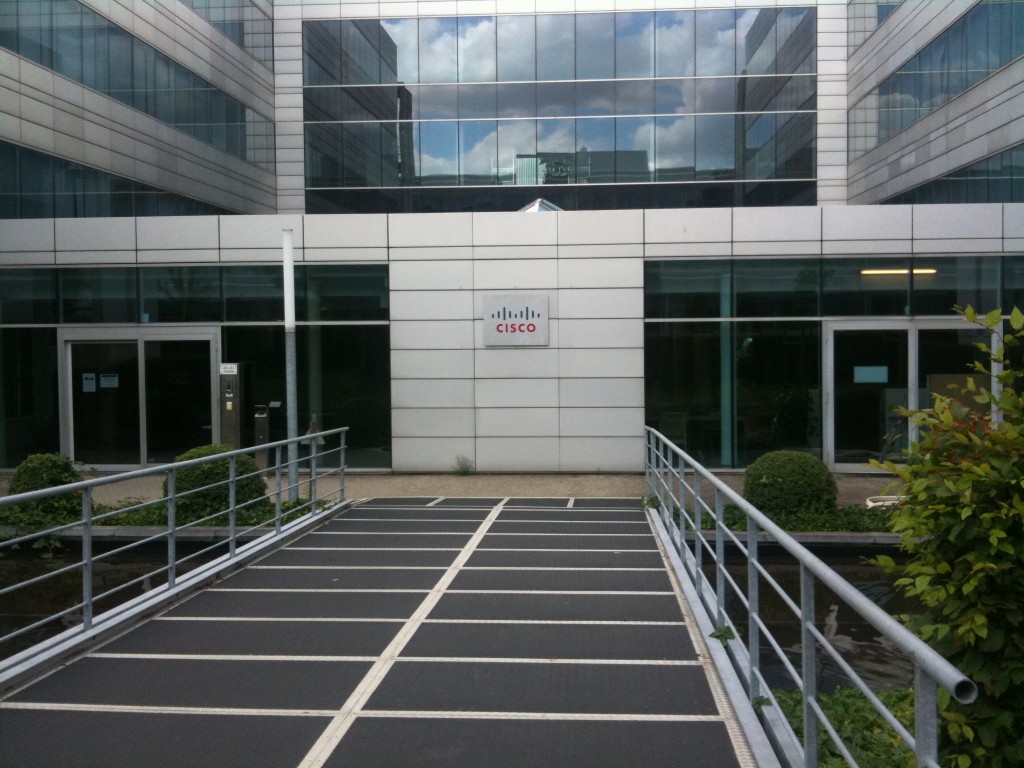 The entrance of the Cisco Campus in Brussels

An update: The support from OSL is overwhelming. Only an hour after posting a note in the mailing list I´ve plenty of supporting feedbacks from friends all over the world. Thanks guys, you are all the best!

I know the feeling Jimmy. All the memories of my failed attempt came back as I read your e-mail.

You are right bro. There is no fail. I know for a fact that the first time is not going to be a pass for me. You will nail it , my friend. Keep working at it. Always know, you’ve a bunch of nerds throught the world (including me) rooting for you .

You will get it the next time.

Do you know what they call a doctor who took his final paper twice?
A: A doctor

Do not worry man! Treat this like a reconnaissance and work out on your weak areas.
I’m sure, you’re going to nail it next time.

Head up and back to work!